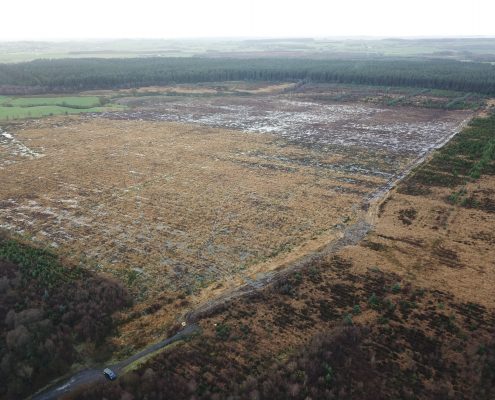 In 2017, Conservefor, a specialist habitat restoration contractor were appointed to undertake the restoration of 62ha of raised bog at the Moss of Cree, 5 miles south of Newton Stewart in Dumfries and Galloway.

The site had previously been afforested with commercial conifer crop (Sitka spruce and lodge pole pine). The site was very deeply ploughed, resulting in prominent ridge and furrow topography. When the forestry operations ceased, around 15 years ago, some drains were blocked to slow water leaving the site. However this had been mostly unsuccessful and the site had started to be taken over by profuse regeneration of the non-native conifer crop.

The aims of the restoration plan were to remove the ridges and furrows by employing ground smoothing techniques, using specially adapted 7 tonne excavators with extra wide bog tracks. Any stumps encountered were to be flipped and buried along with any regenerating conifers. A 20 metre vegetated strip was left in place around the perimeter of the site to minimize erosion and diffuse pollution into the surrounding water courses.

Trees were cut down by hand and stacked around the perimeter to create a hibernacula (refuge) for wildlife, especially Adders. Some birch trees were left standing at intervals across the site to provide further refuge areas in the interior of the peatland.

Our team of experience Habitat restoration operatives, have a wealth of experience operating heavy machinery on deep and wet peatlands and have a demonstrable track record of best practice working on and around wet and sensitive sites. This, combined with our adapted low ground pressure excavators ensured the smooth running of the project and minimal disruption to the fragile wetland ecosystem.