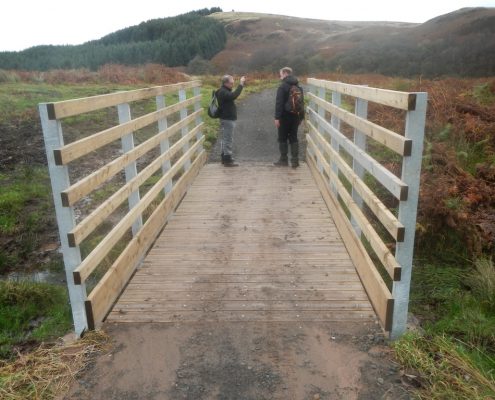 As a leading multi-user trail construction contractor, Conservefor, experts in remote upland access projects, were appointed by the Forestry Commission to implement a new 6.5km section of the John Muir Way.  The new section of trail lies between National Forest Estate adjacent to Burncrooks Reservoir and an existing forest road network in Merkins.

The project included the following work;

The new route runs round the edge of Burncrooks Reservoir, across open moorland and through a dense forestry conifer plantation. Burncrooks Reservoir and surrounding land is designated a Drinking Water Protected Area (DWPA) because it’s supplies drinking water. Under Article 7 of the Water Framework Directive, waters used for the abstraction of drinking water are designated and protected.

Before work could commence onsite a detailed working methodology and risk assessments were produced to cover all aspects of the project which could potentially contaminate the site. Once consent had been given by SEPA and Scottish Water, who are responsible for Burncrooks Reservoir, work started on the development of the new trail in December 2014.

The initial stage of the project saw the construction of a subsoil track and installation of a robust drainage system along the entire line of the route. With years of experience as a multi-user trail construction contractor we understand the importance of drainage. We then floated sections of trail were constructed over deep peat using aggregate laid on a geotextile membrane. All work was completed following SEPA guidance ‘’Pollution Prevention Guideline (PPG) 5: Works and Maintenance In or Near Water’’ this involved, during the construction work, the installation of sediment control management system along the new route. To avoid contaminating of existing water courses during the construction phase temporary bridges were built and pipes laid in to any existing ditches.

On completion of the subsoil track aggregate was imported by 1.8t tracked dumpers. The southern and northern sections of the route were topped dressed this way, approximately four (4) kilometres. Due to the access constraints the middle two (2) kilometre section saw aggregate, bridges and other construction material imported by helicopter. with our wealth of experience as a multi-user trail construction contractor we knew this was the most economic and environmentally the safest way to transport large quantities of materials onto site.

All work was completed in December 2015 and the route is now open and ready for visitors to enjoy.