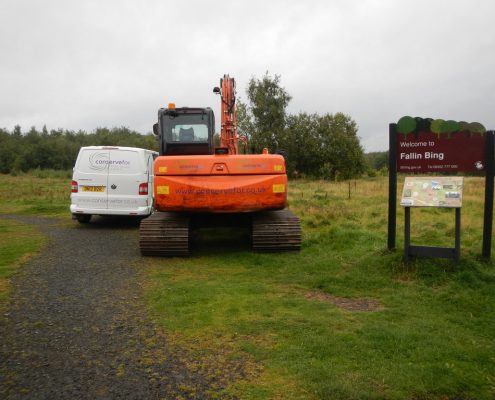 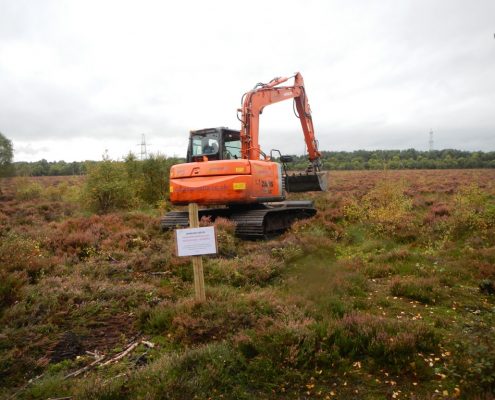 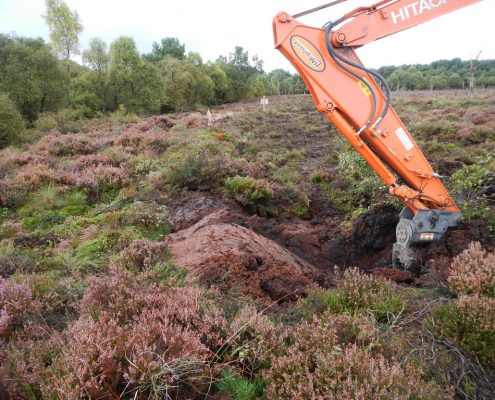 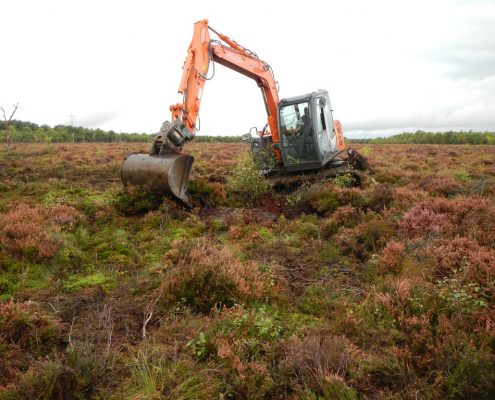 The main objective of the bund installation was to reduce or slow water loss from the south-eastern part of the site through existing drainage channels, sub-surface flow and surface run-off. Consequently a higher and more stable water level should be established in that area of the raised bog. Secondly by re-wetting the upper layers of the peat, the intention is to reduce cracking and slumping of peat that is evident within the south-eastern section of the site.

Initial analysis of dipwell data from Wester Moss suggests that the water level in the south-eastern area of the bog is significantly lower and more prone to fluctuation than elsewhere on the moss. The surface of the peat is noticeably dry and in parts degraded with small scale cracking and slumping visible. The vegetation is also distinctly different with much lower sphagnum cover than generally found across the moss. All the main drainage ditches in the area have been blocked or dammed, but these measures have not resulted in the water level stabilising or regularly becoming close to the surface of the moss. The eastern side of the raised bog abuts directly onto porous material from the old on-site colliery and it is thought that this is leading to water leakage from the peat. The proposed ‘trench bund’ will create an effective hydrological boundary restricting sub-surface flow towards the bog edge. The slightly raised profile of the bund will also reduce surface run-off.

The bund consists of an almost impermeable wall of compacted peat which acts as an underground barrier to sub-surface water flow. The technique has been successful at a number of peatland sites across the UK.

To construct the bund, peat was dug out of a trench up to one metre wide and around one metre deep. The vegetation layer was removed from above the trench and carefully placed to one side. Deeper, wet peat from the trench was turned over, checked for cracks, compacted and then returned to the trench bottom. If cracks were present within the wet peat layer, the trench was dug slightly deeper to ensure that any cracks were sealed. This was important as cracks within the bund could potentially lead to increased sub-surface flow and an ineffective bund. Dry, degraded peat from the trench was removed and placed into borrow pits along with any tree roots that were found.

Borrow pits were used to supply further wet peat for the upper section of the bund. This was compressed and the bund was built up to around ten cm height above the bog surface. The raised level of the bund relative to the bog will slow any surface run-off.

The vegetation layer was carefully replaced on top of the now protruding bund, butted and firmed onto position preventing erosion of the bare peat. The bund was carefully situated to ensure that it fitted in with the bog landscape.